Swooping through the air

Any weapon
Wavers are flying creatures seen throughout the Metroid series.

A Waver resembles a large rugged clam with an insectoid creature living inside. It can perpetually fly through the air without the need of wings.

These enemies constantly arc up and down when traveling, creating a "wave" type pattern, making it somewhat difficult for Samus to shoot them down. Interesting to note is that Wavers move in a similar pattern to the Wave Beam, hence their name.

They appear in Brinstar on Zebes in Metroid and Metroid: Zero Mission, and in Crateria and Norfair in Super Metroid as well. Curiously, while they were fairly abundant in many of Brinstar's upper rooms during the original Metroid game, they are relocated to only two rooms in the remake Zero Mission.

Wavers appear in Metroid: Other M in their first 3D appearance. Wavers inhabit the Biosphere on board the BOTTLE SHIP. They can occasionally be found lying on the ground with their shells closed over their bodies, resembling stones or plant-like pods. When aggravated, the creatures will take off and fly about at random (although in a straight path as opposed to the waving pattern exhibited in their previous appearances), then make a spiraling charge at Samus, which deflects beam attacks.

Their concept art identifies them as an "Aerial (Floating) Type Monster"[1]. It states that the way to tell male and female Waver apart is there is a slight change of color in the male's inner body, and also reveals that they do not need to fly like a bird, as their shells are filled with helium-like gas.

The creatures reappear in Metroid Fusion on board the Biologic Space Laboratories following Zebes' destruction. They seem to have been captured and collected at an undetermined point in time for research and study. When Samus unlocks one of the last few security hatches of the station, she unwillingly allows the X Parasites to come into contact with the Wavers and infect them. The X's ability to tamper with DNA has made the Wavers slightly larger and has given them bulkier, sharper shells.

In one trailer, harmless authentic Wavers can be seen flying in the background (whose sprites are reused from Super Metroid), which are soon infected and mutated by X Parasites (much like Hornoads in the final game). In the final version of the game, normal Wavers are never seen.

"These powerful enemies flutter around in irregular patterns. Shoot at them or they'll attack."

"This creature flits around like ocean waves. They're difficult to aim at and hard to defeat, so it's OK to run."

"It has green wings, and flies erratically through the air. It’s difficult to aim a beam at the Waver."

"Wavers fly in a wave pattern."

"The Wavers are pretty weak but tricky to hit as they fly horizon-tally in a wave pattern."

"Wavers have mushroom-like wings, and will attack Samus with a spinning attack." 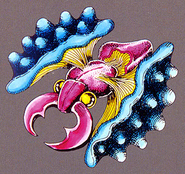 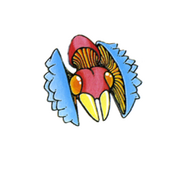