The "west green bubble shaft" is a room in Norfair. It appears, with significant differences between versions, in Metroid and Metroid: Zero Mission.

In both games, this is a vertical shaft composed of green/blue bubble-like material, with multiple levels. It is the leftmost shaft in Norfair and connects to multiple, but fewer rooms than the "east green bubble shaft". Two halves of the room are divided by a pool of fake lava.

In Metroid, it is a two level shaft populated with multiple Sovas and Ripper IIs. The top level contains two midair platforms made of bubbles and a ledge on the left wall that is also made of bubbles. The rightmost wall has two doors, through which Samus can enter and exit the room via alternate corridors. This wall is lined with Fake Blocks, which can be shot and jumped on as they reform to aid in climbing the shaft. At the base of this shaft is a pool of fake lava. Samus can lay a Bomb in it on the left side to drop through the floor into the second part of the shaft. Here, she finds more midair bubble platforms, a Fake Block pillar in midair, and genuine lava at the bottom. There is a door here that leads into the Hopping-Mad Corridor.

In Victory Techniques for Metroid, Samus comes to this room on page 101. She excitedly drops into the shaft, landing in the pool of lava. Initially she panics, thinking it to be real, but drops through the floor after laying Bombs and bounces off a platform to the ground.

In Zero Mission, the shaft has more rugged walls compared to the original Metroid, and connects to a Map Room and a hidden tunnel leading to Kraid's Lair. The upper shaft is now much shorter. Upon entering the fake lava pool, it disappears as if it were a mirage. Samus can morph into a lone block in the floor to fall through to a lower shaft with multiple ledges and platforms. The genuine lava below is now a much deeper pool, with four block-like platforms in the lava providing a way out should Samus fall in. Once Samus is able to use the Gravity Suit later in her mission, she can safely drop into the lava to reach a lava-filled passage with two expansions. In the floor at the bottom of the lava is a pair of Missile Blocks, which give way to a ledge blocked by Fake Blocks. Once those are removed, Samus can enter the passage.

136 IT LOOKS LIKE LAVA, BUT IT'S NOT! (pg. 58)
"After you download the Norfair map on the far left end of the corridor, return to the right and drop into what looks like a lava pool. As you as you take the plunge, the substance will disappear, leaving you to explore Norfair's lower-left depths. Jump and blast as you go."

285 DROP INTO THE LAVA (pg. 92)
"Use a Power Bomb and a missile to break into the shaft that runs through Norfair's lower-left section. Fall into the false lava pool, blast through the ground, then drop until you dunk into a real lava pool. Don't worry - your Gravity Suit will protect you from the molten mess."

286 MISSILE THROUGH THE MUCK (pg. 92)
"At what appears to be the bottom of the lava pool, fire missiles through a pair of stacked blocks on the ground. Drop through the new hole you create, and zizag your way through the passage to a blue hatch."

The door to the Hopping-Mad Corridor in Zero Mission.

Samus entering the room from Kraid.

Full view of the first half in Metroid. 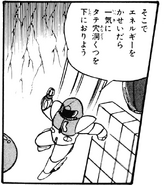 The room on a hand-drawn Map in Victory Techniques.
Community content is available under CC-BY-SA unless otherwise noted.
Advertisement