The "western lava-filled path" is a room in Norfair. It appears in Metroid and Metroid: Zero Mission.

In both games, this is a long corridor to the left of the Norfair entrance shaft, and consists of multiple ledges and platforms over lava, with a wall in the middle of the room. This wall can be bypassed using the Morph Ball and Bombs.

In Metroid, the room is made up of mostly natural burgundy rock material, with one section near the middle containing metal bricks and blocks. Just past this is a wall made of purple bubble-like material, with a secret tunnel in its base. This can be entered and passed through with the Morph Ball, with occasional blocks in the way, which can be destroyed with Bombs. The exit is beyond the wall.

In Zero Mission, the room has not changed much. It now contains Air Holes based in the lava, which is now more shallow, and some of the platforms appear to be constructed. Boulders, stalactites and cave walls are visible in the background. The wall that separates the other half of the room is now much smaller, and is obstructed by two Fake Blocks. Behind it is a ledge which acts as a point of no return, as Samus cannot jump back up to it once she drops down until she obtains the Power Grip in Crateria, which is accessible through the next room. The base of the ledge is formed out of Boost Blocks, allowing for a Ballspark through the path from neighboring rooms.

This room can no longer be visited during Super Metroid.

Missile Tank
In Metroid, this tank is found on a pedestal in plain sight. In Zero Mission, it is found on a block near the ceiling, which is initially unreachable. While Samus can wait until she has the Power Grip before getting this tank, she can also Turbo Bomb up to it. The official strategy guide even encourages this (see below).

032 TAKE A TANK WITH A TRICK (pg. 36)
"As you advance to the left, you'll discover a Missile Tank that appears to be out of reach. You'll be able to collect it easily once you have the Power Grip, but if you want it earlier, you can use bombs to reach it. Roll up and press B quickly and repeatedly to place explosives in midair and rise to the tank."

033 DISAPPEAR INTO THE SCENERY (pg. 36)
"A thick wall stands between you and your progress to the left. Bomb through a block at the base of the wall, roll left and disappear into the wall, then bomb through another block when you reach the far side."

034 POINT OF NO RETURN (pg. 36)
"By rolling off the high ledge and onto much lower ground, you'll enter an area that won't be able to exit until you have the Power Grip. If you haven't saved your progress recently, do so in the save room to the right of the elevator before you move in."

047 missile tank (pg. 39)
"If you didn't use the bomb trick to collect the Missile Tank on the high floating block on your way to Crateria, you'll be able to collect it easily on your way back. Grip the block, then pull yourself up to the prize."

019 ROCKET POWER (pg. 110)
"The area to the left of the Norfair elevator is full of Missile Tanks. Explore the upper corridor first. After you collect one Missile Tank, continue on to the left end of the corridor and use Bombs to blast through the wall." 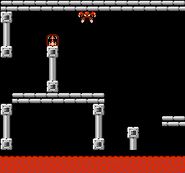 The Missile Tank in Metroid.

The Missile Tank in Zero Mission.

The room on a hand-drawn map in Victory Techniques for Metroid.
Community content is available under CC-BY-SA unless otherwise noted.
Advertisement