Who Are You? was a television marketing and print campaign run by Nintendo from 2002-2005 to promote the Nintendo GameCube and Game Boy Advance. The commercials, which proclaimed that you are what you play, included advertisements for Metroid: Zero Mission and Metroid Prime 2: Echoes in 2004.

The commercials showed players with either a character's face over theirs or a title above them. One commercial depicted a person dismounting a bike, with the title "Bounty Hunter" shown above them. It then cut to scenes from Echoes.

Another Echoes-related commercial featured a woman walking down an alley, while the parts of Samus Aran's Varia Suit materialized over her body. Eventually, the entire suit (sans the helmet) is complete, and she aims her Arm Cannon in front of her (not at the camera) before gameplay footage is shown. The woman speaks throughout the commercial: "Two seperate worlds: one shadow, one light. Where the difference between life and death is a few inches of metal."

Metroid: Zero Mission also had a live-action commercial, which is depicted in a gymnasium setting. A girl is seen performing numerous back flips before Spin Jumping through the air (the motion of which is identical to the spin jump of Zero Suit Samus in the game) before landing on the gym mat. Game footage then follows. 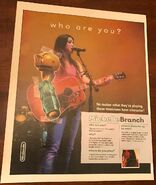 Print ad, featuring Michelle Branch.
Add a photo to this gallery
Retrieved from "https://metroid.fandom.com/wiki/Who_Are_You%3F?oldid=269404"
Community content is available under CC-BY-SA unless otherwise noted.