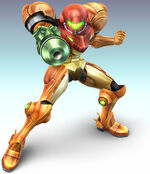 Samus Aran is the main character and protagonist of the Metroid series. Introduced in 1986 in Metroid, Samus is a bounty hunter famous for her accomplishments on missions thought otherwise imposible. Armed with a cybernetic Power Suit built by the Chozo, an ancient highly intelligent race, she is a powerful opponent in battle. She hunts Space Pirates and energy-draining alien parasites known as Metroids, while completing missions given by the Galactic Federation. Samus is voiced in Metroid Prime and Metroid Prime 2: Echoes by Jennifer Hale, but only for cries of pain, grunts and death screams. Despite many male protagonists, Samus is one of the few female ones. Metroid led players to believe Samus was a male as the instruction booklet used male descriptions for Samus and her always wearing suits led players to believe she was a robot or male in a robotic suit. However, only by completing Metroid under an hour revealed Samus to be a young athletic woman. Although Samus wears the Power Suit throughout most of the Metroid series, it has become a tradition to depict her in much more revealing attire at the end of each game, often as a reward for satisfying certain conditions, such as completing the game quickly or with a high percentage of the game’s items collected. Contrary to popular belief, Samus was not created by Metroid producer Gunpei Yokoi. The original game concepts were done by game director Makoto Kanoh and was designed by Hiroji Kiyotake. (more...)
Recently featured: Zebes

Metroid Prime 3: Corruption is a Wii video game in development by Retro Studios to be published by Nintendo. It is the third and last installment of the Prime trilogy (not counting Metroid Prime Hunters and Metroid Prime Pinball) and the tenth game in the Metroid series. The game takes place shortly after the events of Metroid Prime 2: Echoes and is about Samus Aran finding the source of Phazon and finally destroying Metroid Prime once and for all. Other Bounty Hunters will join Samus in Corruption and voice acting has been confirmed, though it is unknown if Samus herself will speak in the game. It has also been confirmed that there will be no online play. Corruption is currently set for release on August 27, 2007 in North America and October 26, 2007, in Europe. (more...)
Recently featured: Samus Aran — Zebes

Metroid Dread is a future game in the Metroid series developed by Intelligent Systems and published by Nintendo. The game is set to be released for the Nintendo DS. However, it is believed to have been cancelled, though reports from IGN and Nintendo of Europe contradict this. First announced in June 2005, no information regarding the game has been released since 2006 and has not been shown at any E3s. (more...)

Super Metroid was developed by Nintendo R&D1 and published by Nintendo for the SNES in 1994. Super Metroid is the third installment in the Metroid series. With its 24-megabit cartridge size, it was the largest game available for the console at the time of its release. It is considered one of the greatest games in the video game industry and one of the most popular games in the Metroid series. The storyline deals with Samus Aran giving the infant Metroid she found on SR388 to Ceres Space Colony. As she is leaving in her gunship, the station sends a distress signal. Upon exploring the station, she finds the dead bodies of the researchers and eventually finds Ridley holding the infant Metroid. Ridley escapes from the station and heads to Zebes with Samus following him. On the planet, she finds Space Pirate operations once again. She learns that Kraid, Ridley, and Mother Brain have all been resuscitated despite being killed by her on her last mission on the planet. As Samus battles Mother Brain, the infant Metroid gives up its life to save Samus and does so again indirectly in Metroid Fusion. (more...)
Recently featured: Metroid Dread — Metroid Prime 3: Corruption — Samus Aran

Neo Ridley is the ninth boss Samus faces aboard the Biologic Space Laboratories research station in Metroid Fusion. For some unknown reason, Ridley was put on board the BSL station despite Samus never encountering him on SR388. The first time Samus sees Ridley on the Main Deck shows him frozen in a locked ice-cold room. Eventually, Samus enters the back of this room and sees Ridley shatter, with an X Parasite floating away from the body. As she continues exploring the station, she meets Ridley, now infected with an X Parasite, causing him to be known as Ridley-X. Once she defeats Ridley-X and the Core-X that comes out of him, she regains her Screw Attack ability. (more...)

Dark Samus is Metroid Prime taking on the form of Samus Aran. After Samus defeated Metroid Prime on Tallon IV, she took her Phazon Suit and exploded. As Samus left the planet, inside the crater where they fought, in a pool of Phazon, an arm appeared out of it with an eye on the hand. This was Metroid Prime, reborn as Dark Samus. When Metroid Prime had taken the Phazon Suit, Samus's DNA merged with Metroid Prime's DNA, causing her to transform into a Samus look-a-like. Dark Samus manages to leave Tallon IV, looking for more Phazon. She eventually discovered the planet Aether, a planet with two dimensions. A meteor had previously landed on the planet, causing the planet to have two dimenions and cause the spread of Phazon on the planet. Dark Samus explored Aether and absorbed any Phazon she could find on the planet. Samus Aran eventually lands on Aether and encounters and fights Dark Samus a number of times. Once Dark Samus can no longer take defeat anymore, she disintegrates in front of Samus's eyes, though somewhere in space, she reforms into Dark Samus once again. Her fate is revealed in Metroid Prime 3: Corruption, where she now has an alliance with Space Pirates and is infecting planets with Phazon. (more...)

Project Helix is the code name Space Pirates gave a program that involved fusing Phazon with Space Pirate DNA. Based on previous experiments with Phazon, the Space Pirates believed that they were now ready to combine the element with their DNA. Based on their studies, the Space Pirates believed that with the help of Phazon, they could create radical new Pirate genomes. However, benevolent mutation levels were high in current test subjects and "Phazon madness" was a concern, though they concluded refinements in the infusion process should reduce the odds of mental degeneration. The initial experiments were with Space Pirate embryos. By combining Phazon with their DNA, the Space Pirates were hoping to create an elite unit of Space Pirates, known as 'Elite Pirates'. There was limited success with few pirates reaching maturity. However, research by team Sclera eventually made a breakthrough in which parasite studies with a Phazon strain code-named 'Vertigo' were very successful. Based on this research, pirates were then infused with Vertrigo Phazon. The success rate greatly increased, and the Space Pirates army of Elite Pirates grew much larger.

Federation Marines are members of the Galactic Federation Police(By the time of Metroid Prime 2: Echoes the Galactic Federation Marine Corpes A.K.A The GFMC) who wear advanced suits of powered armour. These suits allow them to use potent weapons and resist heavy damage in battle, causing few who can match them in combat. One of the most common sites on Federation worlds, the marines are the police of the Galaxy. Many a young child dreams of becoming one, to have such glory.

Although they are mentioned frequently throughout the series in the instruction booklets , they are first introduced in Metroid Prime 2: Echoes(though a similarly armoured corpse is seen in Super Metroid) , when a Space Pirate Frigate crashed on Aether and they met the Ing. Echoes tells the story of GFMC Task Force Herakles's fight against the Ing Horde, revealing much background information about the federation police. They travel around the Federation in patrol ships. These are the backbone of the Federation Armed Forces. The marines mostly fight against the pestering Space Pirates that attack planets, space stations, and other things located in the Federation. Some think that thay appear in the Metroid Fusion introduction movie, as there are Characters that look very similar, yet it is possible that they are merely environment suited scientists. 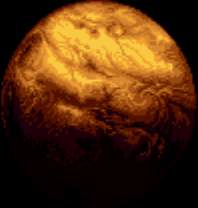 Zebes is the second planet from the sun FS-176 and habitat of the devious Zebesian Space Pirates and Mother Brain. Zebes has occasionally been mistranslated as "Zebeth" due to the fact that "s" and "th" make the same sound in Japanese pronunciation, though it has been confirmed that the planet's official name is Zebes. However, the pronunciation is disputed: IPA: ['ziːbəs] according to the original US Metroid commercial, but IPA: ['zebəs] according to an unused voiceover from Metroid Prime. Zebes is the locational setting of the original Metroid, its enhanced remake, Metroid: Zero Mission, and Super Metroid. According to Metroid Prime, Zebes has a mass of 4.8 trillion teratons and is in the same system as Ooromine II, Twin Tabula, Bilium, and Tallon IV. Samus Aran was raised on Zebes by Chozo after her home on an Earth colony, K-2L, was destroyed by Space Pirates.

Phazon is a highly radioactive element known for its extreme mutagenic and energy producing properties. The element Phazon has been responsible for the near-destruction of two worlds, Tallon IV of the Chozo and Aether of the Luminoth. In both cases Phazon arrived on the planets via interstellar objects, now known to be Leviathans. On Tallon IV the Phazon devastated and poisoned the ecosystem, eventually destroying the Chozo society that existed there. In Aether, the Phazon Meteor struck the planet and split it into two dimensions, driving the planet and its inhabitants into turmoil.

Many life forms exposed to Phazon radiation expire within seconds. However, some life forms can survive the Phazon exposure, although the price to be paid is horrible mutation of the body and mind. Subjects exposed to Phazon over long periods of time may develop a form of mental breakdown known as Phazon Madness or Phazon Sickness. This condition affects the mind, driving the subject to the point of mental instability and a constant hunger for more Phazon. Life forms that survive Phazon exposure usually gain increased muscle mass and newfound abilities, but suffer a decline in cognitive thought and general lifespan.

Although Phazon is first portrayed solely as a dangerously radioactive destructive substance, Samus, and later the Federation, discovered that the Space Pirates had taken advantage of Phazon's mutagenic properties to create a powerful biologically engineered army of Phazon-enhanced Pirates and other creatures. The Pirates had begun a series of Phazon exposure experiments with native Tallon IV life forms to test Phazon mutagenic abilites, even managing to infuse sapience in inorganic matter (the findings of the Thardus venture). In further experiments, the Pirates had begun Phazon infusion experiments, injecting subjects with pure Phazon. In Metroid Prime, it is the player's ultimate goal to eradicate the source of the Phazon after stopping further Space Pirate experimentation with Phazon.

Phazon originates from the planet Phaaze, a sentient living planet. Phaaze sends living meteors known as Leviathans to other planets in order to infect them with Phazon.

In Metroid Prime 3, an entire system of planets have been corrupted with Phazon. Dark Samus, revived from her defeat in Aether's Dark Dimension, has launched enormous Phazon seeds called Leviathans into planets. It is the player's goal to eliminate these sources of Phazon.

Phazon can react with an unknown chemical to produce Phazite, thicker plates of which can only be damaged by concentrated phazon energy orbs. Thin plates slough off damage, but can be damaged with the Plasma Beam. The Nova Beam phases right through it.

Retrieved from "https://metroid.fandom.com/wiki/Wikitroid:Featured_articles/2007?oldid=227451"
Community content is available under CC-BY-SA unless otherwise noted.