The Dark Suit is the first suit upgrade Samus Aran receives in Metroid Prime 2: Echoes and so far appears only in that game. It was created by the Luminoth as a modification to their weapon systems to allow entrance to the Dark Agon Wastes to get the Sky Temple Keys in order to defeat the Emperor Ing. The Dark Suit is received by Samus Aran after deafeating Amorbis. The Dark Suit reduces the damage she takes by 20%, protects against Dark Vapor excreted by Ingclaws, and filters out roughly 80% of the corrosive effects of Dark Aether's atmosphere so that Samus only loses approximately 1 unit of energy per second (as opposed to 5 energy per second with the Varia Suit). (more...)

The Wii, codenamed "Revolution" during production, is the seventh generation gaming console developed by Nintendo. It is the smallest Nintendo console to date. The Wii's disc slot reads both the new 12 cm Wii discs but is also backwards compatible with GameCube games. Older games are available through the shop channel with Wii points, each roughly equal to one penny, by direct download. NES, SNES, N64, Sega Genesis, and TurboGrafx games can all be downloaded for a set amount of points each. The controller, officially named the Wii Remote but dubbed the "Wiimote" by fans, is shaped similarly to a TV remote with built in accelerometers whose movements are received by a Sensor Bar placed on the TV. There is an expansion port for added controls including the Nunchuk, the Classic Controller, and Zapper, with new expansions being developed.

The system was designed primarily to snag typical non-gamer demographics. Ease of control, affordable price, and more widely appealing games were priorities to expand the player base. Nintendo president Satoru Iwata himself has said "We're not thinking about fighting Sony, but about how many people we can get to play games. The thing we're thinking about most is not portable systems, consoles, and so-forth, but that we want to get new people playing games."

Currently there are three full-fledged Metroid games for the Wii (in addition to two older games available through Virtual Console), but Samus makes an appearance in Super Smash Bros. Brawl in both her Varia Suit and her Zero Suit form, as well.

SA-X (also known as Samus Aran-X) is the tenth boss Samus faces aboard the Biologic Space Laboratories research station in Metroid Fusion. Although it is not chronologically the final boss in the game, it is without a doubt the game's primary antagonist and main adversary.

The SA-X is an X Parasite mimicking Samus. After Samus's first encounter with the X on SR388, her Power Suit was infected by the parasites. The Galactic Federation removed the suit surgically and sent the pieces to the Biologic Space Laboratories research station's Quarantine Bay. Once there, the infected suit parts transformed into a X resembling Samus. The SA-X was able to use a Power Bomb to escape the Quarantine Bay, which caused the capsules containing all the X to break open, starting the infestation.

Pirate Command, or the Command Center, is a main sector of the Pirate Homeworld. The sector is the hub of all Space Pirate activity on the planet, and so is protected by masses of Pirate Troopers and Pirate Commandos. The area's central hub room is the Command Courtyard. This sector of the Homeworld deals with the most important issues facing High Command, and this is also likely where they reside. Here, interactions with the Leviathan Seed are made, and the Phazon it produces is sent to Pirate Research for examination and experiments. The Pirate Commander seen on the Homeworld makes most of his appearences here, notably on the Skyway.

The Command Center is split into three levels. These areas can be navigated between by the central Lift Hub room.

Super Smash Bros. Brawl is the third installment in the Super Smash Bros. series, after Super Smash Bros. Melee and Super Smash Bros. It is for the Wii, and Samus Aran is a playable character. The game also has Zero Suit Samus as a playable character after Samus performs her Final Smash move (Zero Laser), does a Special Taunt, or if the player holds down the guard button on the controller before selecting a stage. It has a Metroid based stage, Norfair, which is based on the area of the same name. It also has another stage called the Frigate Orpheon, based on the original Pirate frigate that Samus infiltrates in Metroid Prime. Players can use different suit colors of Samus as they could in the past games, swapping palette in the suit texture. Three of the palette swaps resemble Samus in her Fusion Suit from Metroid Fusion, her Gravity Suit, her Dark Suit from Metroid Prime 2: Echoes and two other colors are Green and Pink schemes. A Metroid appears as an Assist Trophy.

Ridley appears as a boss in the Subspace Emissary adventure mode in both his regular form and as Meta Ridley.

A Reptilicus can be distinguished from a Reptilicus Hunter by its generally darker coloring, as well as the spiny protrusions located on its back, similar in appearance to the flora on Bryyo. They are large, lizard like creatures with six limbs, standing on their back two legs when wishing to attack and for intimidation. They appear to wear a skull-like mask on their faces.

They use highly advanced technology despite their appearance; they have the ability to teleport and use high-tech weapons, including an electrical whip-like weapon, some form of boomerang and some kind of projectile weapon, possibly arcane. They are resistant to Fuel Gel but weak to extreme cold, so it is possible that they originate from one of the warmest regions of the planet. Bryyonian texts also claim that newborn Reptilicus used to be ceremonially bathed in Fuel Gel, so it may be that they just have evolved a resistance to the substance. They definitely have a resistance to fire, as they do not burn when hit by the Plasma Beam. Reptilicus also use Warp Hounds for assistance, creatures that have been trained to ambush enemies, and that share the teleporting ability of the Reptilicus. Warp Hounds are most often used by Reptilicus Hunters over the standard Reptilicus, showing that the Hounds are used for hunting purposes as well as guarding. 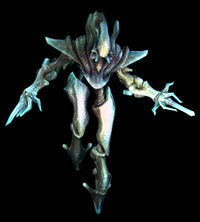 Rundas is a Bounty Hunter who debuted in Metroid Prime 3: Corruption. He is voiced by Christopher Sabat.

Rundas was born on Phyrigis, a moon of planet Bes III known mainly for ice mining. Phyrigisians are commonly able to manipulate and generate ice, however, Rundas is one of very few to use this ability as a Hunter. Rundas was terminated approximately one month after his corruption during the Space Pirate attack on Norion. He was immediately killed upon being impaled with a spire of ice.

He enjoys hunting, to the point that he keeps trophies of all targets he has successfully captured or killed in his career. He is also considered extremely proud, cocky, and arrogant, believing himself to be unmatched in his field. However he seems to have a strong sense of justice. His arrogant demeanor leads him to mainly seek solo missions and rarely works with others. Despite this, he seems to feel an uncharacteristic sense of camaraderie toward Samus Aran.

Weavel is a Bounty Hunter who appeared in Metroid Prime Hunters. Weavel is a Space Pirate general whose body was destroyed with only the brain and spinal cord surviving. He then was fused to a cybernetic body with an energy scythe installed in his right arm.

Weavel was a powerful Space Pirate general. He was left for dead after a battle with Samus Aran, only his brain and spinal cord functioning. His only hope for survival was an experimental procedure in which his body was fused with a mobile life support system. The Space Pirates installed what was left of his body into a robotic shell with life support systems and weaponry, including an energy scythe. Since then he has become a general and bounty hunter for the Space Pirate forces. Weavel, like Samus Aran and Sylux, has a ship used for transport, however it is only seen in preview artwork and briefly glimpsed in a cutscene upon entering Oubliette, as well as a small image on a page the February 2006 issue of GamePro.

"This cybernetic warrior is part of a Space Pirate special unit. Badly injured in a past battle with Samus Aran, Weavel's body has been reconstructed and fused with a Power Suit. The rebuilt Weavel has become a formidable and ferocious warrior." -Weavel, Metroid Prime Hunters Instruction Booklet

Retrieved from "https://metroid.fandom.com/wiki/Wikitroid:Featured_articles/2009?oldid=227794"
Community content is available under CC-BY-SA unless otherwise noted.