The Emperor Ing is the eldest and strongest Ing in the Horde, their Alpha and Omega. He resides in the Sky Temple, with the main Ing energy controller. Samus Aran's battle with this evil monstrosity is depicted in Metroid Prime 2: Echoes. Being the very first Ing born from Dark Aether's creation, the Emperor Ing has been mutated and strengthened by Phazon energy and from the stolen Light of Aether. It has the capability of manipulating both dark and light energy to create attacks that can easily eat away Energy Tanks of Samus' health in seconds. (more…) 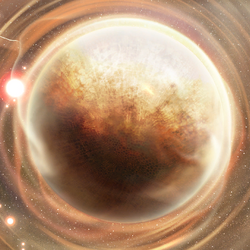 Elysia is a planet featured in Metroid Prime 3: Corruption. Its most notable characteristic is that the planet seems to be covered in a perpetual cloud of unknown gases. As a result, the only known inhabitants of Elysia have been the Chozo and the robotic Elysians who lived and maintained a large outpost named SkyTown high above the clouds of the planet, where the atmosphere is habitable (as Samus is able to survive there in her Zero Suit in the game's secret ending).

Anthony Higgs is a male Galactic Federation Soldier first seen in Metroid: Other M. He investigates the Bottle Ship with a group of soldiers acting under Commander Adam Malkovich, wearing blue armor and a yellow/orange visors, and are equipped with Freeze Guns while fighting an unidentified purple creature. He revealed his face by sliding his faceplate open and asking, "Remember me?" and nicknames Samus Aran "Princess". He is the only soldier inhostile towards Samus when she arrives, going so far to forcibly lower the guns of two of his fellow Marines. (more...)

The Bottle Ship is referred to as "a decommissioned space facility" in Metroid: Other M. This "derelict space station" is the abandoned ship seen in the original trailer's asteroid field. It is one of the main areas of the game.

Samus enters the station after her gunship recieves a distress signal from it. She explores the ship and encounters her former comrades from the Galactic Federation, including Adam Malkovich, Anthony Higgs and Lyle. The group defeats a purple beast composed of smaller insects and then splits up to explore the rest of the space station. Due to an unknown event possibly involving ULF 46, the Bottle Ship later explodes, possibly after a Countdown.

The Bottle Ship appears to be surrounded by space gas, with some debris surrounding it, making the station look as if it is destroyed.

Metroid: Other M is a new Metroid game announced by Nintendo at E3 2009 and developed by Team Ninja and Nintendo. Taking place between Super Metroid and Metroid Fusion, Other M is said to feature a similar storytelling style to Fusion while retaining the "traditional Metroid feel". The designers are putting an emphasis on adventure, and aim to have a "seamless and natural" interaction between gameplay and cinematics. The game will be played with a sideways Wii Remote similar to the NES Controller, while aiming it at the screen switches the view to a first-person perspective similar to the Prime series. (more)

Zebesians[1] are the most common form of Space Pirates. The true planet from which Zebesians originate is currently unknown; presumably, they are not from the Space Pirate Homeworld as the Metroid Prime Trilogy art booklet states that it is one of several homeworlds. However, series director Yoshio Sakamoto has said that the Pirates took "Zebesian" as a general name for themselves after the conquest of Zebes, comparing it to most "Americans" actually being descended from Europeans and only calling themselves Americans after conquering the true Native American tribes. The Zebesian race is composed of feral, mindless beasts that can only properly function as an intelligent group when united under leadership.

Ridley is said to have been the 'original Zebesian' according to the information in the first game's instruction manual. This has not been mentioned again, even in subsequent retellings of the game's story, and may no longer be canon; however, this may be similar to how ancient Roman generals took the titles of places they conquered, such as Germanicus.

Rhedogians[1] are creatures encountered in Metroid: Other M. Blue in color, and ferocious in nature, Rhedogians have a highly resilient carapace and can slash foes with extendable, clawed arms. Their single, lidded eye is covered by two giant mandibles which curve over their heads. Rhedogians are also capable of flight and multiple forms of attack, including Laser and Missile projectiles to impale and barrage enemies from afar. These features along with lightning fast speed make the Rhedogian a deadly creature that is one of the top predators in the Bottle Ship's ecosystem.

Samus Aran encounters a Rhedogian four times during her mission on the Bottle Ship. The first encounter is alone atop an elevator in the Cryosphere after fighting off seven Wave Beam-equipped Zebesians. The same Rhedogian is fought twice in the Pyrosphere. Much later, Samus is again jumped by the Rhedogian on her way out of the Biosphere. This time, it is defeated once and for all, leaving the Seeker Missiles for Samus to collect. Two different Rhedogians are later fought one after the other in the post-credits sequence as Samus returns to the station, just before reaching the Control Bridge.

Commander Adam Malkovich's helmet is the headgear that the Galactic Federation commander wears when in his battle armor. His helmet is identical to that of his soldiers, as it is blue in color, with an 07 logo on the forehead and the nape of the neck, and red emblems on the sides, as well as a yellow visor that can be lifted up.

At the beginning of Metroid: Other M, Adam can be seen wearing the helmet like the rest of his team. However, as he briefs the group, he can be seen with it off. He took it off and left it beside his communication device as he briefed the team. When racing to Sector Zero, he left the helmet behind.

Adam later died in the sector. Days after the incident, Samus Aran returned to the Bottle Ship to "rescue something that can't be replaced." Samus was forced to take a detour as the Elevator that would take her to the Bottle Ship Control Room's top floor was not working. She quickly took the alternate path and reached her goal before the station's destruction. She removed her Power Suit and held the helmet in a tender moment. During the five-minute Countdown, Samus holds the helmet as she escapes in her Zero Suit. As she reaches her Starship, she turns to the helmet and calls it "Adam", apologizing for leaving it behind earlier.

It is unknown what happened to the helmet after Other M, or if it even survived the destruction of Samus's gunship in Metroid Fusion. However, if in the case that it did not, it is possible that it would eventually not really matter to Samus, because Adam's mind was somehow preserved for the game (possibly in the helmet) in the form of her new computer CO, that turned out to be Adam near the end of the game.


Cite error: <ref> tags exist, but no <references/> tag was found
Retrieved from "https://metroid.fandom.com/wiki/Wikitroid:Featured_articles/2010?oldid=227793"
Community content is available under CC-BY-SA unless otherwise noted.