The Aether incident was a conflict between the Luminoth and the Ing. Many technologies were created by the Luminoth during the war, including the Dark Beam, Light Beam, Light Beacon, Light Crystal, Energy Transfer Module, and various mechanoids found in the Sanctuary Fortress, such as the Quads and Ingsmashers, though most creations came to be controlled by the Ing.

Zoomers are semi-spherical mollusks with spikes along their backs. They originally only appeared in two colors: yellow and red, and were called Geemers starting in Super Metroid, though the Metroid Prime series has since reinterpreted them as two separate species, with Zoomers being the weaker of the two. Zoomers are the first creatures ever encountered in the series. Their intellect is limited to walking in set patterns along the terrain, meaning that Samus Aran must accidentally run or jump into them in order to be harmed. The Zoomers located on Tallon IV have 18 eyes, while Geemers have only three of them.

In all its incarnations, the simple-minded Zoomer is capable only of walking in set patterns. It will not directly attack Samus: she must instead accidentally touch one in order to take damage. (continue reading)

The Wood Beam is the sixth beam weapon in Super Metroid. It can be found in Warfair through usage of the Pipe Boots. It is the strongest weapon in the game, dealing even more damage than Super Bombs. (continue reading)

Commander Adam Malkovich, previously General Adam Malkovich, was the celebrated military genius that served in both the Federation Police (formerly), and in the Galactic Federation Army as the only Commanding Officer to Samus Aran during her time in the Galactic Federation. He was described by Samus as being gruff, harsh, a perfect military mind, and relentless in criticism - but not a machine obsessed with duty. The way he is described suggests that Samus had grudging respect and admiration for him that has since grown into friendship. Adam is first introduced in Samus' soliloquies in Metroid Fusion, though he is seen and interacted with in Fusion's prequel, Metroid: Other M, which greatly expands on his character, revealing that he left the police, and joined the Army as a commander, leading the 07th Platoon.

Brinstar (ブリンスタ Burinsuta) was an underground complex of caverns and jungles on Zebes. Home to many creatures, Brinstar is used as a Space Pirate base, and is relatively easy to navigate. The area appeared in Metroid, Zero Mission, and Super Metroid.

In Metroid and Zero Mission, the area was covered in blue and orange rock; while Super Metroid retained some rooms from this part of the area, it expanded Brinstar to also include green jungle sections as well as red-soiled swamp areas and some kind of pink material. Kraid's Lair is a sub-section of Brinstar. (continue reading) 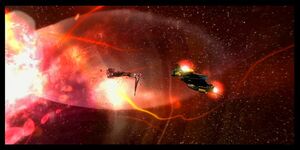 The G.F.S. Valhalla is a Galactic Federation Olympus-class battleship that was attacked by Space Pirates during a training mission in the Klar Nebula four months before the events of Metroid Prime 3: Corruption. A GF reconnaissance drone was sent to the station which revealed footage of the ship with a very large amount of damage dealt to the ship. The savagery of the attack was remarkable, even for Space Pirates. Equally unusual is that they left behind valuable components frequently stolen in prior Space Pirate raids. All they stole was an Aurora Unit — Aurora Unit 313. A ship as formidable as the Valhalla had never before been attacked by the Space Pirates, suggesting mobilization and organization never before experienced.

During the events of Metroid Fusion, Samus was infected by X Parasites and much of her Power Suit was surgically removed. She was given a vaccine made from the DNA of the Baby that saved her life. While this meant that Samus was now completely immune to the X Parasites, it also gave her a Metroid's weakness to cold. Because of this weakness, Adam conjectured that the new Fusion Suit would reject the Ice Beam upgrade, so the Galactic Federation never tried to create a downloadable version of the beam for Samus.

Retrieved from "https://metroid.fandom.com/wiki/Wikitroid:Featured_articles/2013?oldid=227790"
Community content is available under CC-BY-SA unless otherwise noted.