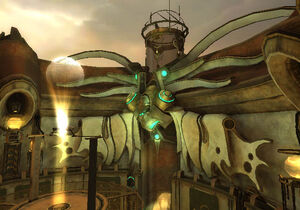 The Chozo Searcher was one of the Chozo researchers who inhabited SkyTown, Elysia, a Chozo research facility placed in the skies of the gas giant planet Elysia. While the Searcher's name is unknown, it is known that she is female. Thus, she is the only named female Chozo, discounting Samus Aran, who is a Human-Chozo hybrid. The Searcher was apparently the first to discover the sentient planet Phaaze, although this encounter was brief and little to no information regarding the identity of the planet was discovered. She made her discoveries from the Chozo Observatory, a room in Eastern SkyTown, Elysia designed to document and investigate other planets by the use of Elysian satellites.

When it came time for the Chozo to depart Elysia, the Chozo Searcher requested that the Elysians continue to explore the skies for the mysterious planet. The Elysians finally did find the planet some 1050 years later when Phaaze launched a Leviathan at an unknown planet (possibly the Pirate Homeworld) and the Elysians were able to uncover its origin as a wormhole, leading back to Phaaze.

The Assault on the Pirate Homeworld was a full-scale attack commenced by the Galactic Federation on Urtraghus, near the end of Metroid Prime 3: Corruption.

Samus Aran's Light Suit is the ultimate blending of Luminoth and Chozo technology. It was solely created to counter the forces of darkness and it has proven to render Samus immune to darkness effects that would otherwise hinder her. The Light Suit contains the Light of Aether which renders the atmosphere of Dark Aether harmless, allowing Samus to dive into Dark Water without danger, walk unscathed through the Ingstorm, and ride on Light Shafts.
read more 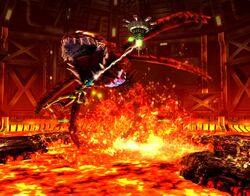 The Vorash is a creature featured in Metroid: Other M. It is a large, fish-like being that inhabits the Lava-filled areas of the Pyrosphere in the Bottle Ship. After being instructed by Adam to follow a purple monster into Sector 3, Samus enters the main tunnel of the Pyrosphere, and notices a large creature jumping out of the lava. As she nears the end of the tunnel, Vorash suddenly jumps out of the lava in an attempt to ingest Samus. Vorash seems to have somewhat of a fixation on eating Samus.

Dark Aether was created when a Leviathan from Phaaze crashed onto Aether, splitting it into two dimensions. Dark Aether is called as such because it is a twisted "dark" version of Aether, and the "dark matter" in its atmosphere is damaging to "light" beings, such as humans, the Luminoth, and Space Pirates. Simply visiting Dark Aether can quickly kill creatures of the "light" universe unless precautions are taken. Dark Aether is home to the Ing, a race of shadow beings.

The Shinespark is a move Samus can execute after getting the Speed Booster ability and has appeared in every game with it. It was originally taught to her by the Dachora on Zebes. The Shinespark is performed by activating the Speed Booster, crouching, and then jumping. When jumping, Samus can choose to aim the Shinespark in one of five directions; these directions are left, diagonal up-left, up, diagonal up-right, and right. The process must not be interrupted if the Shinespark is to be performed successfully. Once she has stored a charge by crouching, Samus may stand up and move around as usual with the exception of jumping normally, which will activate the Shinespark. This may be avoided by performing a Spin Jump, which does not activate the technique. While Samus cannot fire any beams while doing a Shinespark, a charged beam can be maintained during a Shinespark in Metroid: Zero Mission.

Retrieved from "https://metroid.fandom.com/wiki/Wikitroid:Featured_articles/2014?oldid=227789"
Community content is available under CC-BY-SA unless otherwise noted.