The "Wrecked Ship Main Shaft" is the main room of the Wrecked Ship. It appears in Super Metroid.

This is the largest room in the Wrecked Ship, and connects to multiple rooms, many of them dead-ends. Like the rest of the ship, it has a dark green color scheme, with extensive damage visible throughout. This includes frayed architecture, broken wires, and exposed pipes in the ceiling and floor, which break apart when shot to reveal hidden exits. Because there is no power when Samus enters the Wrecked Ship for the first time, most of these rooms cannot be accessed until she defeats Phantoon, as doing so restores power. Sbugs are present in the room and run off when Samus approaches, while Coverns may occasionally appear if Samus idles for too long.

Samus can climb up and down the shaft using multiple steps with staircases embedded in both walls, two of which appear to be linked to higher ledges via scaffolding. More scaffolding is visible further in the background. At the very bottom of the shaft is a Green Hatch leading down to Phantoon; this is bordered on either side by glass tubes with Atomics visible in them.

When power is restored, the lights in the room come back on, Sbugs and Coverns no longer appear, and several broken wires begin to spark. Additionally, the glass tubes that held the Atomics have now broken, and the creatures themselves released. All doors to other rooms become accessible, allowing Samus to collect multiple expansions.

Missile Tank
On the penultimate staircase on the left, Samus must lay a Bomb at the base of the wall. This tank is found at the end of a hidden passage in the wall, lined with conveyors, Kzans and spikes. It can be obtained before or after restoring power to the Wrecked Ship. Getting it when the ship is without power is much safer, as the conveyors and Kzans will not move and the spikes will not harm Samus on contact.

B. GHOSTS! (pg. 81)
"Before the power gets turned back on in the Wrecked Ship, Coverns will appear wherever you go. If you stand around in one place for too long, they will appear right on top of you. This is why it's important to keep moving. They'll be gone once the power is back on."

A. SNAG THE MISSILES IN THE CORRIDOR (pg. 82)
"Unlike the Energy Tank in this Area, you should get the Missiles before tangling with the boss, Phantoon. It's a whole lot easier to get through the hidden passageway before the power gets switched back on. The floor won't be moving and the traps won't be operable. There are a lot of spikes in this corridor."

Note (pg. 82)
"Morph down and place a Bomb against this wall to open a hole."

B. CHECK FOR PASSAGES (pg. 83)
"There are a couple of hidden passages that lead to corridors that are not shown on your map. Bomb around where the landings meet the walls."

B. X-CELLENT! (pg. 84)
"As it is in any area in the game, the X-Ray Scope will be of great value in the Wrecked Ship. With it, you can locate bricks and blocks that cover secret passageways leading to hidden rooms and corridors. And in those rooms and corridors, there are usually Items to be found. It's definitely not a waste of time to use the X-Ray Scope! It would be nearly impossible to find all of the Items in the game without its help, or the help of this Player's Guide!"

Note (pg. 84)
"Two Bombs will be enough to get you through this hidden passageway."

IT'S TURBO TIME (pg. 57)
"Bomb through for a secret passage. You'l have to turbo bomb at first, then keep pushing to the right."

ONE FOR FIVE (pg. 57)
"This floor is impervious to anything but a super missile. Blast it to gain access to more super missiles." 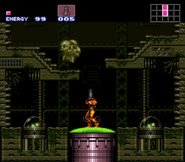 The entrance to the bottom corridor. Note the two Atomics in glass cases.
Community content is available under CC-BY-SA unless otherwise noted.
Advertisement