Yumbos are small creatures that live on SR388, encountered by Samus Aran in Metroid II: Return of Samus.

Yumbos fly side-to-side high overhead, so they rarely pose any sort of problem. They're very mosquito-like in appearance. The feathers along their long needle seem to rotate, giving the appearance of a chainsaw. Their rather small wings don't look as though they could support the weight of their entire bodies, but somehow they barely manage to.

"Flies unsteadily in the air." 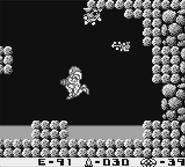 A Yumbo in Phase 1

Metroid: Samus Returns Artbook
Add a photo to this gallery
Retrieved from "https://metroid.fandom.com/wiki/Yumbo?oldid=256541"
Community content is available under CC-BY-SA unless otherwise noted.