Runs horizontally through the bottom of Ridley's Lair

The Zebbo Nest (ゼボの巣?)[1] is a long corridor that runs through the bottom of Ridley's Lair in Metroid and Metroid: Zero Mission.

The layout of the Zebbo Nest is largely the same in both Metroid and Zero Mission. It is a long horizontal hallway constructed primarily from purple blocks and grating, giving it a more "artificial" aesthetic compared to the temple ruins found throughout the lair. A small section of the corridor features silver pipes, where a Missile Tank can be found on a pedestal. There are multiple lava pools.

The main threat of the room comes from the infestation of hostile creatures, including Holtz, Dessgeegas (Metroid), Violas (Zero Mission), and especially Zebbos. The narrow and cramped corridor is full of Air Holes that continuously spawn the Zebbos while giving Samus Aran very little room to avoid them or use the Screw Attack.

In Metroid, much of the room's layout is very similar to Imago's hideout, even appearing as an "extended" version of the latter. Sections of the Zebbo Nest feature the same repeating map tiles. This is likely one of many examples of conserving memory in the game's programming. In Zero Mission, where Imago's hideout was redesigned, the Zebbo Nest is more unique in layout.

Notably, there are hidden passages in the ceiling, masked by bluish-purple grating. Samus can run through these walkyways to put more space between herself and the Zebbos' Air Holes, making the room somewhat easier to traverse. In Zero Mission, these flat walkways are long enough to activate the Speed Booster; this is required for Shinespark puzzles in the vertical shafts on either side of the Zebbo's Nest. Samus can also use a Shinespark to easily launch straight through the Zebbo Nest.

Missile Tank
In both games, a Missile Tank is found sitting on a metallic pedestal about halfway through the corridor. Samus has to be careful not to fall in the lava through holes in the floor; in Metroid, these holes are invisible.

"The bottom is a Zebbo Nest!! As the passages are narrow, it's easy to take damage!!"[1]

160 MAD DASH TO AN UNMAPPED AREA (pg. 64)
"To the right of the map room, you'll find a long flat walkway near the ceiling. Go to the right end then run left to build up your Speed Booster. Kneel to stop, drop to the ground and jump over the gap to the left while maintaining your charge.

Open the hatch, tap A to hop up, then hold left to blast off."

162 missile tank (pg. 65)
"Although you can collect the Missile Tank in the long lower corridor the conventional way, it's good to practice to speed-boost to the item. Run to the right along the passage near the ceiling to charge your booster. Kneel, drop, press A and hold Right. You'll fly over the lava and into the tank." 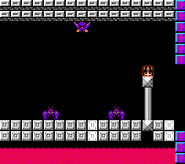 The Missile Tank in Metroid

The Missile Tank in Zero Mission