Wikitroid
Register
Don't have an account?
Sign In
Advertisement
in: Pages with sourced titles, Rooms, Tourian,
and 7 more

The Zebesian Command Center[1] is the location in Tourian where Mother Brain is situated. Once used by the Chozo to hold gatherings and converse with their A.I., the room later became the central base of Space Pirate operations during their occupation of Zebes. In the games, the chamber is a long horizontal corridor containing various hazards in the form of security systems and lava.

The Command Center has since been rebuilt and copied over the course of the series. It appears as a room in Metroid and Metroid: Zero Mission, and in Super Metroid.

During the Chozo's reign on Zebes, the Command Center was a serene, seemingly pristine chamber that held immense importance to the race due to Mother Brain's presence. Housed within her Control Capsule, she was wired to most, if not all technological systems of the planet. In addition, the A.I and the chamber itself could access vast amounts of offworld information, allowing the Chozo to remain up to date on current events and oversee distant operations, an example being the Metroid propagation on SR388. The Command Center's lower section was filled with an unknown liquid which led the Chozo to use floating platforms in order to approach and discuss matters with Mother Brain.

When the Space Pirates invaded the planet, the Command Center was heavily damaged. All of the liquid in the room leaked out, revealing the room to be larger than initially seen. The once immaculate surfaces of the room were now crumbled ruins and large boulders were present throughout. Only Mother Brain and her capsule remained untouched, likely due to the Pirates' newfound loyalty to her.

It is at this particular time that the organic super-computer unveiled hidden security defenses within the room, consisting of a hidden opening in the ceiling from which the A.I could drop a wall of Zebetite along with a pyramid-shaped trapping mechanism that emerges from the ground to capture hostile individuals.

Within a few years, the Space Pirates gave the chamber an entirely different look and layout: metal panels, alloy pipeworks and additional wiring covered the surrounding surfaces while pools of lava filled some of the lower sections of the room. The Commander Center was also outfitted with numerous Zebetites, Cannons and Rinka generators to provide defense for Mother Brain. Overall, these changes gave the room a sinister atmosphere.

The Zebesian Command Center was thus converted into the heart of the Pirates' operations on Zebes where Mother Brain would provide the marauding race with wealth of information and knowledge, oversee and command their forces across the cosmos. This vastly increased their threat levels against the Galactic Federation.

In the original game, the first battle with Mother Brain took place within the Zebesian Command Center and the room itself was relatively simple in appearance with no background. The entrance was on the far right side of the room and Mother Brain was located on the opposite side, but between these two ends were five Zebetites, 15 Cannons and 14 Rinka generators. Five floating platforms were present for Samus to use as she moved towards her target, with the last few being particularly useful to avoid the pools of lava that fill the last segments of the corridor. After destroying Mother Brain, the metal wall behind the Control Capsule transformed into a Blue Door and the self-destruct sequence is triggered, leading to the destruction of the Command Center and leaving it in ruins.

In the remake of the first Metroid game, the Zebesian Command Center was visually updated and its layout was slightly altered. Some of the changes consist of the floors being closer to the ceiling, and a reduction in the number of security defenses. The location where the last Zebetite was located in the original game has been replaced by a metal structure with an opening at the top big enough for Samus to roll through with her Morph Ball. Traversing through it will trigger the opening to close behind her and trap her in the final section of the Command Center where Mother Brain is.

The most striking change to the room itself is the background which now features a slightly obscured, large mass of tangled red and blue tubes or wires that are likely connected to Mother Brain. This gives the chamber a disturbing and organic look.

Later in the game after Mother Brain's defeat, Samus can return to the destroyed Command Center and discover it has since been flooded by Beta Acid which is corrosive enough to harm Samus even with her new Gravity Suit active.

The years that passed during the Metroid Prime series allowed the Space Pirates and their new allies, the Kihunters, to build another Tourian deeper within the planet. Consequently, another Zebesian Command Center was also constructed to house the resurrected Mother Brain. The remains of the original center could still be visited in Crateria, where it is initially covered in fog before Zebesian Pirates ambush Samus; this same room was also seen in a functional state during a flashback at the game's introduction. The background of the original Command Center is revealed to be covered in metal panels with glowing lights, a vastly different interpretation from Zero Mission 's. Once more, an item can be uncovered under the ruins of the Control Capsule, though it is a Missile expansion this time.

The new Zebesian Command Center, also known as the Tourian Command Center[1] consists of metal materials. The scalding-hot lava here is the same as the one seen mostly in Lower Norfair which is capable of bypassing the protection of the Gravity Suit, though it is not present at first and is gradually flooded into the room. There are 12 Cannons and 11 Rinka generators along with four Zebetites that impede Samus from reaching Mother Brain. When Samus destroys the Control Capsule, the spaces that were moments earlier occupied by the final Zebetite close shut, sealing her inside the last segment of the corridor where she battles Mother Brain's second form but not before the lava is drained from the chamber.

Once the Pirate leader succumbs to her injuries, the ensuing Countdown begins and the pipes on the left wall explode, revealing a small extension of the Zebesian Command Center with shutters that Samus must blast through with her new Hyper Beam until she reaches a door on the floor.

One of the preview trailers for Metroid Prime 3: Corruption reveal that the Galactic Federation have developed blueprints to build a chamber for one of their Aurora Units. This chamber is evidently influenced by the Zebesian Command Center and also features Cannons. It is unknown what became of this, but its layout is curiously similar to the second Command Center that would eventually be built on Zebes.

The Zebesian Command Center is briefly seen in flashbacks during the introductions of Metroid: Samus Returns and Metroid: Other M, and in the third Ending Reward in Metroid Dread. Samus Returns shows an image of Samus's first fight with the Mother, while the latter two games show the second battle (in cutscene and image form respectively). The Command Center as depicted in Other M and Dread appears to be much larger, and contains pipes that Mother Brain knocks away after recovering from the baby's attack.

Missile Tank
Super Metroid. Bombing the floor under Mother Brain's former location reveals a chamber Samus can drop into, at the bottom of which is this Tank. This is a separate room in Zero Mission, containing a Power Bomb Tank.

CRATERIA AREA C (pg. 32)
"Those who played the original NES version will remember Area C as the last area of the game, where Mother Brain resided. You'll find that it has expanded."

D. MOTHER BRAIN'S LAST ADDRESS (pg. 33)
"You can see the place where you battled Mother Brain last time around, but where has she gone now? You can Bomb down through her old resting place to find some Missiles. She must have been trying to stockpile them there."

C. SHOOT OUT THE ZEBETITES (pg. 115)
"The barriers that block your way to Mother Brain sustain her with alien, life-giving goo. Select and quickly shoot Missiles at the red sections until they disappear. You can't hesitate between shots because the Zebetities will rejuvenate themselves back to full strength. Don't worry about taking some hits. It's better to take a hit than to stop shooting."

ZAPPING THE ZEBETITES (pg. 70)
"You'll need to task[sic] out these barriers while avoiding the Zebetites if you're to make it to Mother Brain."

BOSS BATTLE (pg. 135)
"The leader of the Metroids is the monstrous Mother Brain. On your way to the brain, you'll break through regenerating Zebetites. After you destroy the last Zebetite, stand where it was and target the brain with a steady stream of Missiles. Step to the right if the shots are about to hit you."

207 ZAP THE ZEBETITES (pg. 74)
"The living barriers that block the way to the Mother Brain grow back unless you clear them away quickly with high a concentration of missiles. Look for safe spots where you can unload missiles without taking damage."

208 mother brain (pg. 75)
"The monster that lords over Zebes uses the planet's core as an energy source. The Mother Brain can withstand a pounding and it fights back with punishing blasts. After you destroy the Zebetites and before you fight the brain, return to the area near the save room to replenish your energy and missiles in preparation for the ultimate battle."

278 power bomb tank (pg. 90)
"Detonate a Power Bomb at the remains of the Mother Brain to expose a Super Missile Block. Hit the block with a big rocket, then drop into the resulting hole."

Flashback in the Super Metroid introduction. 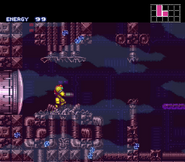 Samus revisits the original center after it becomes desolate.

The former location of Mother Brain. 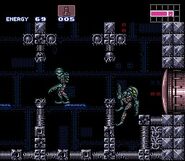 Zebesians in the ruins of the room in Super Metroid.

The entire room in Super Metroid

The room's first and second Room States in SMILE.