This article is about the creature. For other uses, see Zero (Disambiguation).

Bombs, Plasma Beam, Screw Attack (Other M)
A Zero[1][2][3], or zoro[4], is a worm-like creature found on Zebes, later revealed to be larval Kihunters.

Zeros first appeared in Super Metroid. They are colored green and are always seen crawling out of dried-up skins, most likely from recent moltings. At first glance, they seem to be completely harmless, until Samus actually makes contact with them, thus harming her with their spiked bodies. Zeros have a 99% chance of dropping a Power Bomb Ammo and 1% chance of dropping an Energy Capsule when killed.

Zeros appear in Metroid: Other M in their first 3D appearance. This time, they have a reddish-brown color scheme. They also feature optical organs not seen in past games.

Zeros are first encountered in the Kihunter Nest in the Biological Experiment Floor. Looking around, Samus notices several Zeros and attempts to proceed without disturbing them. However, a piercing screech caused by Little Birdie puts the creatures into a state of stress, and several Kihunters rush in to defend them and attack Samus while the Zeros burrow into the ground safely.

When encountered outside the nest, the Zeros move around slowly but can use a quick lunging attack, similar to Geemers. They can also attack by shooting webbing, which can briefly immobilize Samus. They are immune to all weapons except for Bombs, Power Bombs, the Plasma Beam, and the Screw Attack. If they are shot by any other weapon repeatedly, they will quickly metamorphose into adult Kihunters within the space of a few seconds, accompanied by a spray of a whitish fluid.

In Metroid Fusion, all Zeros encountered by Samus have been infected and imitated by X Parasites. The X seem to have modified the Zeros, making them slightly larger and adding larger thorns that now cover most of the surface of their bodies. These X-infected Zeros appear in red or blue colors. The blue variant is far more resistant than the weaker red type, will increase in speed as it takes more damage, and almost always release a Red X when killed.

After Zazabi is defeated, all Zeros aboard the BSL Station harden their skins to an indestructible state. Soon afterwards, the Zeros enter a pupal stage; their cocoons, which are still indestructible, are visibly progressing towards an insect-like adult stage. Halfway through the game, the cocoons have hatched and Kihunters (also infected by X Parasites) are seen roaming around near the dried-up husks; this sequence of events was the first to reveal that Zeros are actually the infant/larval stage of the Space Pirate allies.

These creatures mainly inhabit Sector 2 (TRO), but after Nettori's vegetation cuts the station's power, some Zeros have escaped into the Main Deck. While Samus does not encounter any of these escaped specimens, she can find their husks in the Reactor Silo, where the larvae have already metamorphosed into adult Kihunters.

Zeros appear as enemies on the Pyrosphere in Super Smash Bros. for Wii U. They drop down onto the main platform and slowly move about the stage before eventually falling off the edges. A fighter can pick up a Zero and throw it at another fighter or Ridley, causing damage. Additionally, the Zero is so heavy that it weighs down the fighter holding it, making them harder for other fighters to launch off the stage; therefore, there is also strategic value in holding onto a Zero without throwing it.

A Zero also appears as an unlockable Trophy in the same game.

ZORO (pg. 159)
"Zoros have thick bodies which are impenetrable by beams and missiles. They can be damaged by Morph Ball bombs. They move very slowly."

Low-Level Enemies (pg. 9)
Zeros
"Don't be fooled by this creature’s name; the Zero is a dangerous foe. While it doesn't have much of an arsenal (all it does is spit webbing that can cocoon you temporarily), it can immobilize you to allow a stronger enemy, usually Kihunters of some type, to join in on the Samus-killing fun. To make matters worse, the Zeros have a strong exoskeleton that makes them impervious to your Arm Cannon weapons. To destroy them, drop into Morph Ball mode and scatter Normal Bombs near them. The blast will flip them over and destroy them instantly."

"These arthropods with hard exoskeletons are the larval form of Kihunters, a type of enemy from the Metroid series. In this game, they appear on the Pyrosphere stage, where they fall from above and then move about slowly. Throw them to attack your opponents or Ridley, or keep hold of one to make yourself harder to launch." 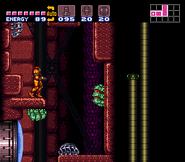 Samus carrying a Zero in Super Smash Bros. for Wii U

Super Smash Bros. for Wii U trophy and description.

Retrieved from "https://metroid.fandom.com/wiki/Zero?oldid=284492"
Community content is available under CC-BY-SA unless otherwise noted.