The Zero Suit also appears in the Game Over sequences for Zero Mission and Other M. In the former, Samus' Power Suit disappears, before she leans back and her hair comes undone from its ponytail. In Other M, Samus will fall to the ground, her suit disappearing when she hits ground.

While in this suit, Samus takes much more damage but is more agile. She is capable of grabbing and hanging from ledges and performing Wall Jumps due to her already-present superhuman acrobatic skills from her Chozo DNA and training. Samus resorts to crawling on her hands and knees to clear small paths, in the absence of the Morph Ball. She retains Power Suit upgrades she has acquired, but is unable to manifest or use them in any way (with exception of Energy Tanks). In Zero Mission she also carries the Paralyzer with her, which briefly stuns her foes with an energy blast, but must recharge between shots. It is unknown what the Zero Suit is made of, or how Samus gets into and out of it, as the suit does not have any zippers or belts. It is possible that it is removed in a similar way to the Power Suit: by deforming at Samus' will. The material has to be some sort of firm polymer, or latex, something that allows Samus to stretch in different positions, but still holds together.

It is possible that the Zero Suit is mixed of Chozo technology, as it is shown to have their symbol implanted on it while Samus is capable of equipping and removing the Power Suit via the symbol. It is likely that the "symbols" on her back, breast and hand are energy-matter converters, transforming the Power Suit and any upgrades into pure energy and storing it via a mental command. When it receives another mental command, it releases the energy, which then reverts to its natural, corporeal form.

The Zero Suit in Metroid Prime Hunters does not possess gloves, has a glowing green line at the base of the neck, different line markings, and does not appear to have the breast sigil. The Metroid Prime 2: Echoes Zero Suit has lighter grey areas than the navy blue depicted in Zero Mission and Corruption. Metroid: Other M's Zero Suit also bears different line markings, as well as larger (if impractical) heels. She also holds the Paralyzer in a black holster on her right leg.

In Super Smash Bros. Brawl, Samus is playable in the Zero Suit, a separate character known as Zero Suit Samus. After Samus uses her Final Smash, the Zero Laser, her Power Suit falls off, leaving her in only the Zero Suit. This form of Samus is quicker and more agile, but also weaker. Zero Suit Samus returns in Super Smash Bros. for Nintendo 3DS and Wii U, this time a completely separate character from her suited self. 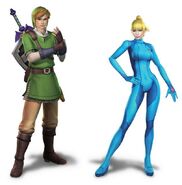 Retrieved from "https://metroid.fandom.com/wiki/Zero_Suit?oldid=217955"
Community content is available under CC-BY-SA unless otherwise noted.