The Zeta's chamber[1] is a room in Metroid II: Return of Samus and Metroid: Samus Returns.

The Zeta's chamber is located in Area 5 of SR388 and is explored during Samus Aran's mission to exterminate the Metroids. This chamber contains one of the Zeta Metroids in Area 5. Unlike the various caves inhabited by other Zeta Metroids, this chamber is notably an artificial room within the area's Chozo ruins.

In Return of Samus, the Zeta's chamber is entered directly from the Grand Cavern, with Samus breaking into the ruins by bombing through a Bomb Block. After walking down a narrow hallway littered by a Metroid Husk, she discovers a Gamma Metroid just as it molts into a Zeta Metroid. This main area of the room is box-shaped, with a pair of metallic pedestals on either side of the room.

The redesigned Zeta's chamber now features a large metallic fence-like structure in the background. It curves forward as it reaches the ceiling, evoking the appearance of greenhouse windows and possibly hinting at the original purpose of the room when it was built by Chozo. Much like the rest of the Area 5 ruins, the room is overgrown with vegetation, with plants seen hanging from the metallic structure in the background. There are three waterfalls visible beyond the structure, while small drops of water drip down in the main room. The chamber's ceiling and upper walls are caked with goo.

In Samus Returns, once the Zeta Metroid is killed, Samus can return to the Zeta's chamber to find it inhabited by a Stronger Hornoad and a Stronger Gullugg. This demonstrates the shifting balance of the SR388 ecosystem: lesser prey are allowed to thrive while the apex predators are driven to extinction by Samus.

In Return of Samus, an opening in the ceiling connects to the Screw Attack's room. In Samus Returns, a Beam Door connects to a flooded room overgrown with coral. 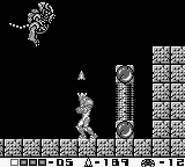 The Zeta's chamber in Return of Samus

An alternate camera angle within the Zeta's chamber in Samus Returns